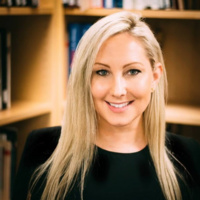 The Digital + Media department welcomes visiting art historian Tina Rivers Ryan to RISD. Ryan is a curator and critic whose work focuses on the intersection of art and technology from the 1960s to the present. In 2017 she became assistant curator at the Albright-Knox Art Gallery, where she was part of the curatorial team for the first retrospective of pioneering media artist Tony Conrad; previously, she was a curatorial assistant in the department of Modern and Contemporary Art at The Metropolitan Museum of Art in New York, where she worked on a half dozen shows, including the postwar survey Delirious: Art at the Limits of Reason, 1950–1980. Her writing on the history of electronic art has been commissioned by such museums as The Met, the Walker Art Center and the Tate, while her criticism of contemporary artists regularly appears in Artforum. She holds five degrees in art history, including a BA from Harvard and a PhD from Columbia, where her research examined the relationship between the discourses of “medium" and “media” in postwar art.