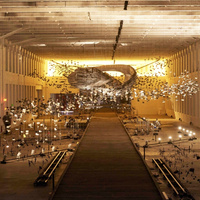 The Glass department welcomes artist Glenn Kaino, who will lead a Hot Nights event in the hotshop. His works, often functioning as poetic contradictions, aim to reconcile conflicting ideologies, opposing systems and strict dichotomies in material and experiential ways. His studio practice includes sculpture, painting, filmmaking, performance, installation and large-scale public work. He also operates outside the traditional purview of contemporary art, instigating collaborations with other modes of culture—ranging from tech to music to political organizing. Kaino is also an Emmy and Webby Award-winning producer and documentarian, whose films have been featured at the Tribeca Film Festival and SXSW.