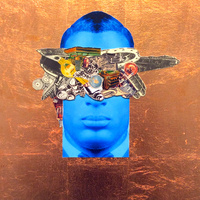 This year, the Criticism + Value series continues the discussion of criticism and value through a series of intimate discussions about the work and practice of national and international artists. The series continues with a conversation between host Ernest A. Bryant III, L.P.I., and American artist, Wayne Hodge.

Wayne Hodge’s work combines elements of collage, performance and photography. His practice explores the relationship between history, media and fantasies of race and desire. His imagery is drawn from media, historical and science fiction sources.

Wayne Hodge is an American artist based in New York. He received his M.F.A. from Rutgers University and attended the Whitney Independent Study Program and the Skowhegan School of Painting and Sculpture. His work has been shown nationally at The Bronx Museum, MoMA P.S.1, and internationally in Germany, Brazil and China. He was featured in 'The Radical Presence' at Contemporary Arts Museum Houston, The Walker Arts Center and the Yerba Buena Center for the Arts. Other exhibitions include 'The Shadows Took Shape' at the Studio Museum in Harlem, and "(an)other" at Practice Gallery in Philadelphia, PA. In 2017, his solo project Skin Like Distant Stars, was shown at Hallwalls in Buffalo, NY. Recent Exhibitions include Mothership: Voyage Into Afrofuturism at the Oakland Museum of California, and Ascension of Black Stillness CEPA Gallery, Buffalo, NY.

Instructor Bio
Ernest A. Bryant III, L.P.I., is an artist and critic from the USA. He has a background in interdisciplinary art. He earned a BFA from the Minneapolis College of Art and Design, an MFA from Yale University, School of Art, where he focused on critical theory, new media, and printmaking; and earned a second MFA in Art Writing & Criticism from the New York School of Visual arts, where his focus was art and society’s relationship to nature. Bryant is currently an SEI Fellow and assistant professor in the Division of Experimental Foundation Studies, and the Illustration department.

Register in advance for this meeting:

After registering, you will receive a confirmation email containing information about joining the meeting. It is planned for this workshop to be recorded and accessible to others.