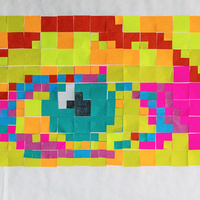 Register in advance for this meeting:
https://risd.zoom.us/meeting/register/tJcocOChqT8qG9SO-8KcJWcgV-Gd_CWxvywP

After registering, you will receive a confirmation email containing information about joining the meeting.

Like art, criticism requires precise tools. Good tools allow alternate articulations and intense levels of precision to be engaged, allowing older tools which have lost their precision to be retired or retooled until they can be used again. In this workshop we will use strategies to identify phenomena which appear elusive and explore forms of criticism and value in examples of art and life.

Ernest A. Bryant III, L.P.I., is an artist and critic form the USA. He has a background in interdisciplinary art. He earned an MFA from Yale University, School of Art, where he focused on critical theory, new media, and printmaking; and earned a second MFA in Art Writing & Criticism from the New York School of Visual arts, where his focus was art and society’s relationship to nature, molestation, conservation, and homelessness. In his work he uses nature, video, image-making, history, positionality, theory and humor to examine the ontological conflicts that arise between different aesthetic and cultural values. Currently, Bryant has been developing a method of augmented drawing that he describes as “a form of drawing that uses line to explore value, labor and its displacement.”

Over the years he has taught mural painting, and studio art to teens. He worked for a non-profit Black art organization as an independent exhibition curator. Most recently he taught a class in prison, for Yale Prison Education Initiative, served as a resident critic and teaching fellow at the Yale Norfolk School of Art, and as a guest critic, in Graphic Design, at Pratt Institute.

He was in residency at the Skowhegan School of Painting and Sculpture, did a self-designed residency in Santiago, Cuba, and was in residency at the Shangyuan Art Scene in Beijing, China, after which he taught in China for 4 years. He has received fellowships for his work from the Jerome Foundation, and the Bush Foundation, and published the book, “Surviving the next four to Eight Years in the United States of America 2017-2025, For Sufferers of a Recrudescent Ideological KRISIS” in 2017.