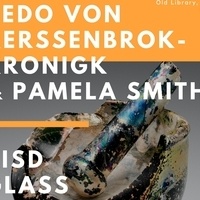 Dedo von Kerssenbrock-Krosigk is head of the Glasmuseum Hentrich, Museum Kunstpalast, in Dusseldorf, Germany. After receiving his doctorate from Humboldt University, Berlin, he worked at the Bröhan-Museum in Berlin. From 2004 until 2008, he was curator of European glass at The Corning Museum of Glass, Corning, New York. He curated the shows “Glass of the Alchemists” in Corning and “Art and Alchemy – the Mystery of Transformation” in Dusseldorf.

Professor Pamela H. Smith specializes in early modern European history and the history of science at Columbia University. Her current research focuses on attitudes to nature in early modern Europe and the Scientific Revolution, with particular attention to craft knowledge and historical techniques.  She is founding director of the Making and Knowing Project, founding director of the Center for Science and Society, and chair of the Presidential Scholars in Society and Neuroscience at Columbia University.