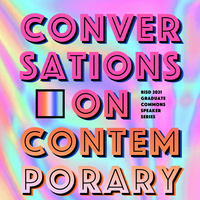 Charles Atlas has been a pioneering figure in the creation of time-based visual art for over four decades, extending the limits of his media and forging new territory in a far-reaching range of genres, stylistic approaches, and techniques. Over the years he has made media/dance works, multi-channel video installations, feature-length documentaries, video art works for television, and live electronic performances.

Throughout his career, he has consistently fostered collaborative relationships, working intimately with such artists and performers as Leigh Bowery, Michael Clark, Douglas Dunn, Marina Abramovic, Yvonne Rainer, Anohni, Mika Tajima, and most notably Merce Cunningham, for whom he served as filmmaker-in-residence for a decade from the early 1970s through 1983.

His most recent solo exhibitions include the past is here, the futures are coming, (2018) The Kitchen, NY, Scary, Scary, Community Fun, Death, (2018) Migros Museum für Gegenwartskunst, Zurich, and Illusion of Democracy, (2017) MoMA, NY. Recent large-scale video installations have been MC9 (2018) at Los Angeles County Museum of Art, The Tyranny of Conciousness (2017) at The Venice Biennale, Cowboy Body (2016) at The Contemporary, Austin, The Waning of Justice (2015) at Luhring Augustine, Chelsea, and The Geometry of Thought at Merchandise Mart, Chicago.

In 2017, following a residency at Rensselaer Polytechnic Institute Experimental Media and Performing Arts Center (EMPAC), Atlas debuted Tesseract, a two-act work in collaboration with Rashaun Mitchell + Silas Riener comprised of a 3D film and a live dance performance with video, which has since shown domestically and internationally. Other significant live performance work includes The Kitchen Follies (2018), a multi-screen, multimedia variety show at The Kitchen, NY that included the work of Jodi Melnick, DANCENOISE, Lady Bunny, among others.

Register Here for the in-person event (only open to members of the RISD and Brown community).

Buy Tickets
This event content is powered by the Localist Community Event Platform.